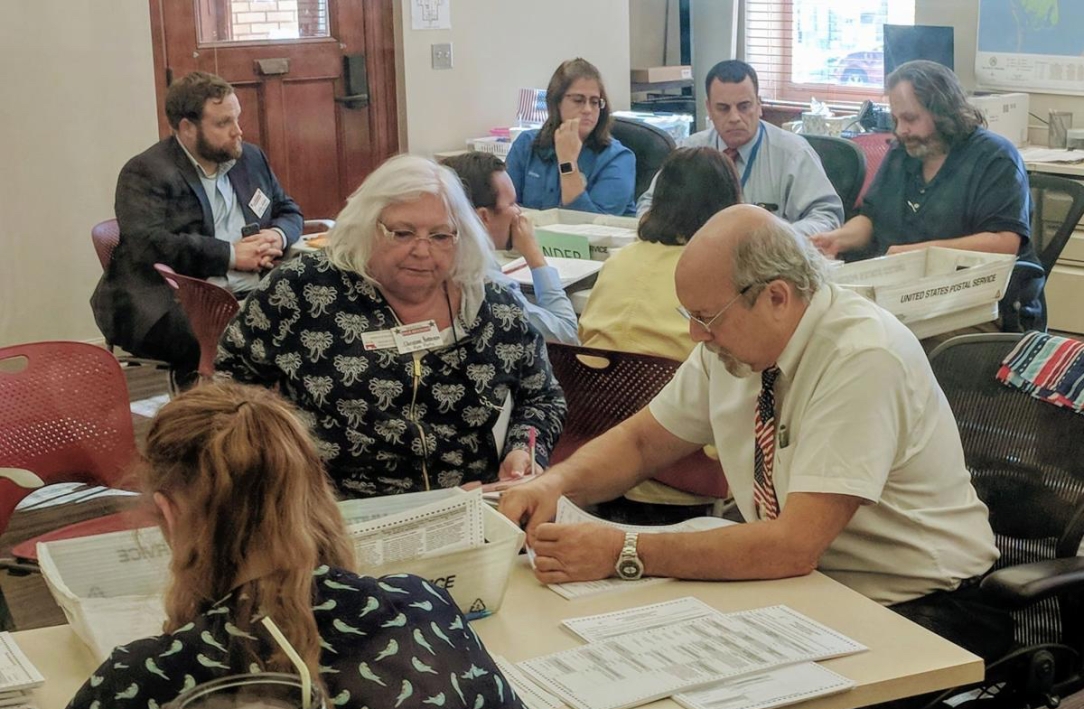 Fraudulent voting or a shaky hand?

Guiding his left with his right, he carefully glided his hand to mimic what he thought his signature was supposed to look like on his vote-by-mail ballot.

“My signature is basically unrecognizable,” he said. With an essential tremor in his hand causing it to shake, he “never knows what’s going to come out” when he writes.

Cunningham came to the Charlotte County Supervisor of Elections office Friday afternoon to check if his vote was accepted or if they had considered his signature a mismatch.

Cunningham isn’t the only Floridian worried if his vote was counted.

As recounts have extended election season well-into mid-November, Florida’s supervisors of elections were ordered to extend the deadline to remedy mismatched signatures until Saturday at 5 p.m. Local elections offices in Charlotte and Sarasota counties remained open until then.

Typically, if a signature is mismatched for a vote-by-mail ballot, the voter will receive a notification via mail and will have until the day before the election to “cure” their vote by sending in an affidavit. Vote-by-mail ballots can be received no later than 7 p.m. on the day of the election.

Since the supervisors and their staff don’t see a voter cast their ballot in-person, the signature is a way to verify that it is truly them voting and prevent fraudulent voting.

But, this extra step of security can hinder a vote from being cast.

“There are dozens of reasons a signature mismatch may occur,” said Chief United States District Judge Mark Walker in a ruling last week, “even when the individual signing is in fact the voter.”

Walker ordered an injunction Thursday to extend the cure deadline for vote-by-mail ballots.

“A person’s signature might change due to a variety of reasons including changes in health or purposely altering or changing the way a person signs their name,” said handwriting expert and forensic document examiner Wendy Carlson.

“Comparing ballot signatures to already recorded signatures is something that should be done by people who have had some form of training and have an understanding of what is considered natural variation in handwriting or what would be considered a suspicious or fraudulent signature,” said Carlson who is based in Denver, Colo.

Neither the area’s Supervisor of Elections or their staff are legally obligated to undergo formal handwriting-analysis education or training.

However, prior to every election cycle, the Charlotte County Supervisor of Elections has Richard Orsini, a forensic document examiner, come to their office and give a presentation on handwriting analysis to the staff.

How to evaluate a signature

Orsini teaches attendees the basics of handwriting and the factors that affect handwriting, teaching them approximately 15 points of examination to determine a fraudulent signature.

“Genuine handwriting must show substantial agreement in sufficient handwriting characteristics to identify the maker and eliminate the possibility of any other writer,” he said.

“The review should take more than a few seconds before sending a signature through for counting,” Carlson said. “As an expert I would take more time to review the signatures mailed than I have seen being reviewed in classes that I have taught.”

Should we even be checking votes this way?

However, she believes the process can be improved with additional training, more staff, a longer time frame to compare signatures, and taking more frequent breaks during the process.

“Once a person is sitting there watching signature after signature come through, a hypnotic state tends to set in and the worker is less likely to notice disparities that should be called to attention,” she said.

Is it that big of a deal?

It’s barely a 1-in-1,000 chance that your mail-in vote will be rejected due to signature mismatch, but a vote’s a vote.

For the general election this year, Stamoulis saw 28 vote-by-mail ballots with mismatched signatures, and 12 were cured by those voters as of Thursday.

This was out of 34,630 mail-in ballots the Supervisor of Elections received in Charlotte County. In the primary election, out of the 16,511 mail-in ballots, just 34 were rejected with no signature, and three for signature mismatch.

In Sarasota County, there were more than 100 cured ballots due to mismatched signatures as of Thursday, according to their communications and voter outreach manager Rachel Denton.

And though a small percentage of votes get rejected in each county, they add up.

“Across 45 of Florida’s 67 counties, there are just over 4,000 rejected ballots for mismatched signatures,” Walker said.

With a Commissioner of Agriculture race determined by 5,300 votes, for example, every vote really does matter.

Luckily, Cunningham’s vote was tabulated and he changed his signature on file so he wouldn’t have to worry next election cycle.

Being a Marine veteran, “I know I’m only one vote but I feel very strongly about this vote,” he said.